An ammeter is a device for measuring the intensity of an electric current in a circuit. The unit of measurement is the ampere, symbol : A.

There are several types :

The most common analog ammeter is magneto-electric, it uses a movable frame galvanometer. It measures the average value of the current that passes through it. For ALTERNATING CURRENT MEASUREMENTS, a diode rectifier bridge is used to straighten the current, but this process can only accurately measure sinusoidal currents.

Analog ammeters are increasingly being replaced by digital ammeters. Yet, in practice, the observation of their needle can provide quick visual information about the variations in the measured current that the digital display gives only with difficulty.

The ferro-magnetic (or ferromagnetic) ammeter uses two pallets of soft iron inside a coil. One of the pallets is fixed, the other is mounted on pivot. When the current passes through the coil, the two pallets magnetize and repel each other, regardless of the direction of the current.

This ammeter is therefore not polarized (it does not indicate negative values). Its accuracy and linearity are less good than those of the magneto-electric ammeter but it makes it possible to measure the effective value of alternating current of any shape (but of low frequency) < 1 kHz).

The thermal ammeter is composed of a resistant wire in which the current to be measured flows. This thread heats up by Joule effect, its length varying according to its temperature, causes the rotation of the needle, to which it is attached.

The thermal ammeter is not polarized. It is not influenced by the surrounding magnetic fields, its indications are independent of the shape (alternating or continuous of any shape) and the frequency of the current. It can therefore be used to measure the efficient value of alternating currents up to very high frequencies.

It very often incorporates temperature compensation intended to maintain its accuracy despite variations in ambient temperature.

It is actually a digital voltmeter 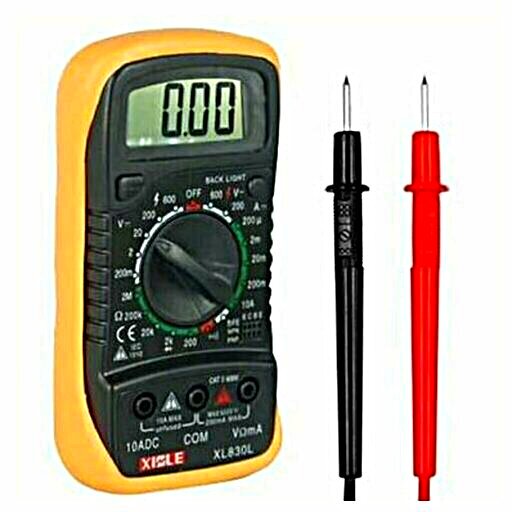 Voltmeter
The voltmeter is a device that measures the voltage (or difference in electrical potential) between two points, a quantity whose unit of measurement is the volt (V).
The vast majority of current measuring devices are built around a digital voltmeter, with the physical quantity to be measured being converted into voltage using a suitable sensor. This is the case of the digital multimeter which, in addition to offerin
measuring the voltage produced by the current to be measured in a resistor (called shunt). The value of the shunt depends on the caliber used.

In application of Ohm's law, the measured voltage U is converted, as a function of the known resistance value R of the shunt, into an A value corresponding to the current.

It is a kind of electrical transformer whose primary is made up of the conductor whose current we want to know and the secondary by a winding wound on a magnetic circuit formed by the two jaws of the clamp.

It is used to measure high alternating currents without inserting anything into the circuit. It cannot measure direct currents.

It makes it possible to measure any currents (alternating or continuous) and of high intensity without inserting into the circuit or interrupting it. The clamp is composed of a magnetic circuit (an intensity transformer) that closes on a semiconductor pellet. This pellet will be subjected to the induction generated by the wire (current to be measured).

Induction is measured because it has the advantage of existing regardless of the type of current. The semiconductor pellet is subjected to a current perpendicular to the induction that passes through it.

All this to cause thanks to the Lorentz force a displacement of load in the pellet which will result in a potential difference that is proportional to the field and therefore to the current, a counter-reaction system requires the transformer to operate at zero flow and it is the current of cancellation of the flow which, converted into voltage using an operational amplifier converter, gives its output an image voltage of the measured current.

They are used in the field of THT (very high voltage), large currents and when the bandwidth of Hall effect sensors is insufficient (study of violent transient regimes, those for which the di/dt is greater than 108 A / s).

This measurement technique uses the Faraday effect : the plane of polarization of light in the glass rotates under the effect of an axial magnetic field.

They are able to measure direct and alternating currents, with great accuracy whether for weak or strong currents. These sensors consist of several coils and cores made of nanostructured composite material with superparamagnetic properties, hence the absence of magnetic remanence over a wide temperature range.

An excitation coil makes it possible to detect the presence of current thanks to the modulation by Neel effect. A counter-reaction coil makes it possible to deliver the measuring current, directly proportional to the primary current and the ratio of the number of turns primary / secondary.
The Neel effect current sensor therefore behaves like a simple current transformer, linear and precise.

Use of an ammeter

An ammeter is connected in series into the circuit. This means that you have to open the circuit at the place where you want to measure the intensity and place the ammeter between the two terminals created by this opening of the circuit.
Direction of connection and polarity

An ammeter measures the intensity flowing from terminal A (or terminal +) to the COM terminal (or terminal -) taking into account its sign. In general, the needle of analog ammeters can only deviate in one direction.

The highest intensity that the ammeter can measure is called a gauge.
All modern devices are multi-caliber : you change caliber either by turning a switch or by moving a plug. The latest devices are self-calibrable and do not require any manipulation.

When using an analog ammeter, avoid using a gauge smaller than the current intensity. This makes it necessary to determine by calculation an order of magnitude of this intensity and to choose the size accordingly. If we have no idea of the order of magnitude of the intensity we are going to measure, it is desirable to start from the highest caliber, usually sufficient. This gives an idea of the current flowing through the circuit.

Then the caliber is reduced to the smallest possible caliber, while keeping a value higher than the measured current. However, it is necessary to carry out the change of caliber carefully, for example by cutting the current or shunting the ammeter during the change of caliber of the device, especially if the circuit is inductive.

The reading of a digital camera is direct and depends on the selected caliber.
For the analog ammeter, the needle moves on a graduation common to several calibers. The indication read represents only a number of divisions. It is therefore necessary to deduce the intensity from this number taking into account the value of the size by making a calculation, knowing that the maximum graduation corresponds to the size.