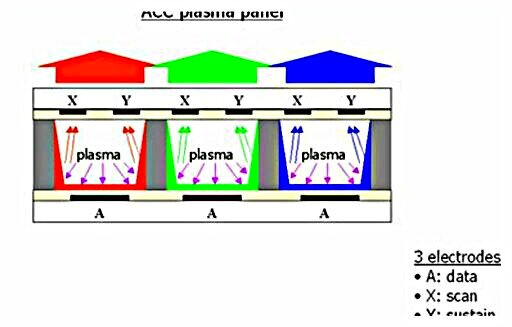 The plasma screens work similarly to the fluorescent lighting tubes. They use electricity to illuminate a gas

The plasma screens work similar to fluorescent lighting tubes (improperly called neon). They use electricity to illuminate a gas.

This mixture of gases is inert and harmless. That issue of light applied an electric current which turns it into plasma, a fluid ionized whose atoms have lost one or more of their electrons and are electrically neutral, so that the freed electrons form a cloud autour. The gas is contained in cells, corresponding to the (phosphors) sub-pixels. Each cell is addressed by an electrode line and a column electrode;
by modulating the voltage applied between the electrodes and the frequency of excitation,
It is possible to set the light intensity (in practice uses up to 256 values).

The light produced is ultraviolet, so invisible to humans, and are the Phosphors respectively red, green, and blue, across cells, which convert it to visible colored light, which allows to get the pixels (compounds of) three cells) 16 777 216 color (2563).

plasma technology allows to make screens of large dimensions and remaining particularly flat, with barely a few centimetres deep, and offering high contrast values even as important as sixty degrees angle. vertically and horizontally. The image can be seen clearly from the top, bottom, left or right, the plasma screens are ideal for professional presentations;
they are particularly suited to all environments subject to the electrical interference, as the electricity production facilities, factories, ships, stations and hospitals. The plasma screens are so much more versatile than traditional CRTs or projectors;
plasma screens generate a wider color, a wider gamut spectrum, and have better contrast, thanks to the quality of the blacks. LCDs are trying to fill little by little this delay;
plasma screens have better responsiveness, they don't suffer in theory of persistence. In practice, they are to halfway between the CRT and the LCD.
plasma screens are not affected of the inherent flaws in the technology of the LCD panels : buzzing, banding, clouding or lack of consistency;
the record of the plasma with 3.81 m (150-inch) diagonal screen was introduced at the Consumer Electronics Show (CES) in 2008, while the largest LCD measures 2.80 m2;
same size, they are cheaper than LCD panels.

A few negatives can also be met :

the biggest downside of plasma screens was their sensitivity to the phenomenon of screen burn (burning) : displayed too long, still images (or a part of the image as the logotypes of the channels displayed in the corners) can continue to see themselves (in overprinting of the current image) for hours, or even permanently in the worst cases. The latest generation screens use a number of technologies designed to prevent the phenomenon and to make it reversible;
the weight of the glass tile is much larger compared to the LCD plastic slabs;
plasma screens have a variable power consumption according to the brightness of the screen; low to display a dark image, consumption can be much higher than an LCD to display a very bright picture. For the same reason, more the image to display is clear, less it will be bright. A completely white picture is able to appear gray.
Conversely LCD TVs work with a constant energy, that the scene is dark or light, because of the backlight that they use all the time;
the dark parts of the image are subject to a tingling sensation, which is visible when you approach the screen;
the screen can transmit a flicker in a similar way to the sweep of the old CRT screens, especially on clear and bright images. Some people sensitive to this effect may find it disagreeable;
inherent in the plasma technology can produce a phenomenon of phosphor trail, similar to the Rainbow effects produced by video projectors with DLP technology. Concretely, a spectator who move his eyes from one point to another of the screen will be bothered by bright flashes of color that delimit the outlines of the high-contrast areas (for example, a subtitle in white on a black background).
they are produced in quantities far less than the LCD slabs that are now the heart and the market benchmark.

For all these reasons, and because of the decline in demand, manufacturers Pioneer and Vizio no longer produce this type of screen. In 2009, Hitachi has closed a factory for the production of plasma screens. In December 2013, Panasonic announced that it will stop making plasma because of low demand screens. Samsung did the same in July 2014. The end of 2014.
more no plasma screen is on sale including those from Panasonic, whose Japanese factories have ceased production in April 2014.

Research in the field of the plasma display is moving towards :

the creation of Phosphors best : this requires developing substances with a best performance of energy dissipated in the form of visible light divided by energy acquired under radiation UV;
improving the shape of cells;
the improvement of the argon-xenon mix for the creation of cold plasma in this environment to provide the most possible ultraviolet radiation.